Harmonic Arborealism is a long string installed instrument, of 17 to 20 meters in length, realised with Vilte Gustyte in 2021.

It was built as a prototype at the Stromy music festival near Prague, in July 2021, and at the Climate Care festival at Floating University in Berlin in September 2021.

With Ellen Fullman’s long string instruments as a starting point, we started to think about the practicalities surrounding such a large scale array of strings. We had three main concerns:
(a) how to attach the strings onto the tree in a harmless, sturdy, tunable manner?
(b) how to create a bridge that would transmit the vibrations into the resonator, and what kind of resonator would be most appropriate for these strings?
(c) how to devise these attachments so that they would sustain the tremendous weight required to put the strings in tension? 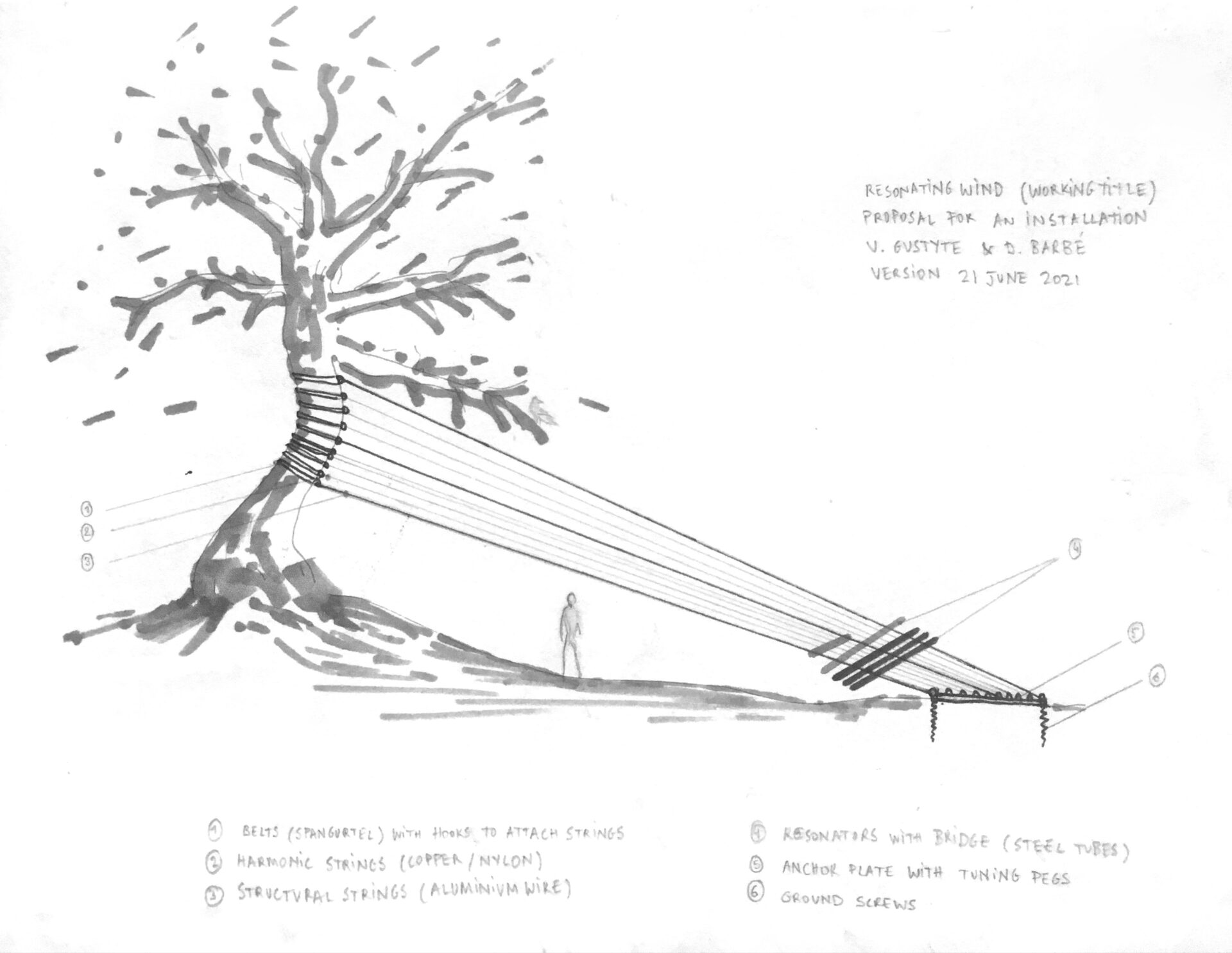 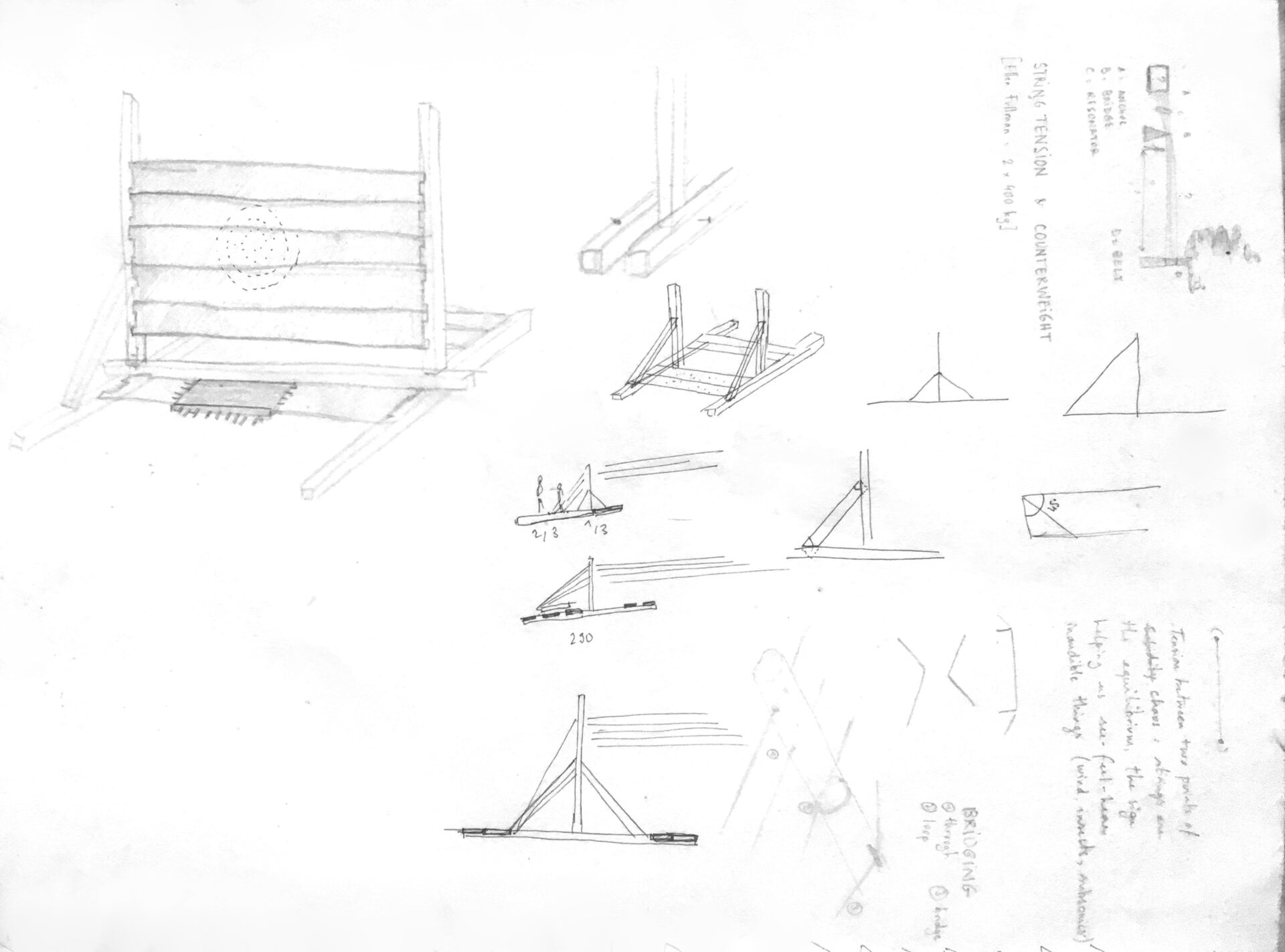 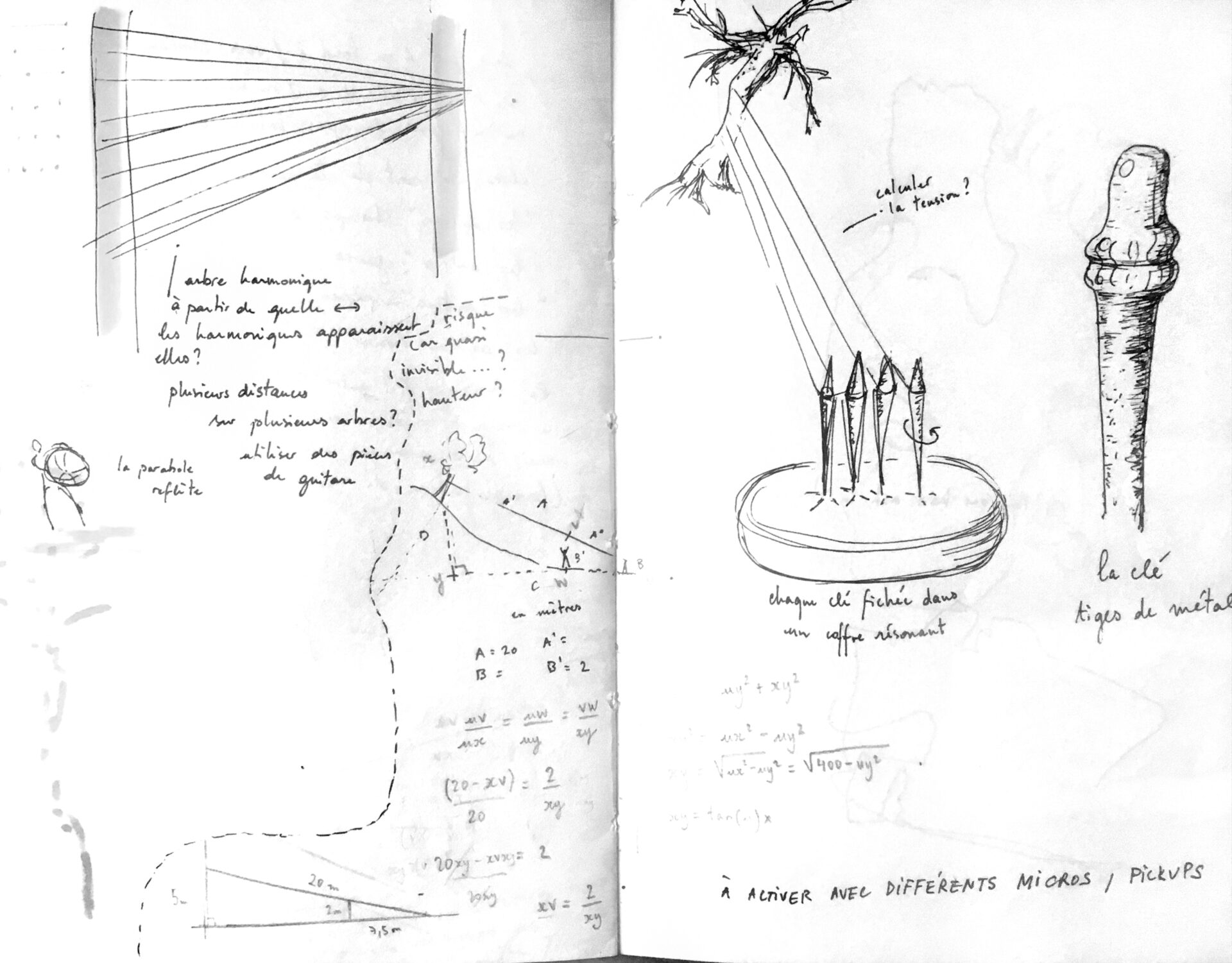 The idea was to create an large-scale instrument that would in some ways be responsive to the environment, both in size and in sound, and that would allow us to explore the qualities of longitudinal acoustic waves on long strings, i.e. sound waves which vibrate at rates well below the human hearing threshold (20Hz). Playing with something that we could only partially, and very quietly, hear required a good dose of hope and imagination.

Conceptually, it was very crucial for us to think in terms of responsiveness, or rather “response- ability” –to borrow the term poinpointed by Donna Haraway in her seminal works on human and non-human entanglements (see for instance Staying with the Trouble, 2016). The philosopher calls for precise, dedicated, inclusive ways of finding resonance with significant others, that is, living beings all around us. We sought to imagine an instrument that would be able to translate the harmonic relations between the shape of a tree’s trunk at one end, a resonator at the other end, and the distance of air which connects them… strings-in-the-wind.

In this sense, we did not regard the trees, the resonators, the soil, the listeners as separate, discrete objects, but rather as “things” in the way Tim Ingold theorises it. That is, seeing that thinking about objects requires us to make an arbitrary differentiation based on notions of absolute boundaries, like skin and bark. But if we take a close look at a tree, for instance, where do the roots really finish? When a piece of bark comes off from the trunk, Ingold points out in Bringing Things to Life (2010), it will likely host myriads of tiny creatures that have made a very productive home inside; are those still the tree?

If we see things not as standing before us as a discrete material object, but rather as a “going on”, or better, as a place “where several goings-on become entwined”, then we as artists, as observers, begin to no longer be separate from a world of objects and start to partake in a world where different things are the reunion of several threads, like knots in a mesh. These threads, in the case of the bark fallen of the tree trunk, are the lives of the termites and spiders that live in it, of the moss and the lichen; they are also, then, the actions and thoughts of two sound artists working with strings, resonators and air to make these threads audible.

You can find out more about which cookies we are using or switch them off in settings.

This website uses cookies so that we can provide you with the best user experience possible. Cookie information is stored in your browser and performs functions such as recognising you when you return to our website and helping our team to understand which sections of the website you find most interesting and useful.

Strictly Necessary Cookie should be enabled at all times so that we can save your preferences for cookie settings.

If you disable this cookie, we will not be able to save your preferences. This means that every time you visit this website you will need to enable or disable cookies again.